Friday 14th September and all teams that entered the 2018 Game Championship meet at the Clube Naval in Ponta Delgada located on the Island of San Miguel, the largest in the Azores group of Islands. At 3 in the afternoon the team captains meeting was held with the organising committee, this was the chance to ask any questions and to be told the arrangements for the week and the boat draw. After the meeting at 5 o’clock all competitors were welcomed at the Clube Naval where  nibbles were  laid on with a glass of wine, also allowing competitors to meet each other and renew friendships with anglers from other countries that have fished together many times. Countries entered in this event were from 7 sections. Portugal (the hosts of Championship), Gibraltar, Ireland, Iceland, Switzerland, England and a barbarian team of England and Scotland.

Saturday 15th and the Championship got under way. The boats left harbour at 0800, but after a couple of hours it was decided to cancel the day as the stormy weather that was forecast for late in the day and the following Sunday came in earlier, as no fish were caught this was not an issue. It was decided to also cancel the Sunday but still fish the 3 days of the championship from Monday to Wednesday when the weather forecast was better.

On the Sunday, the trip that was originally for Monday went ahead with a coach trip around the east part of the Island for all anglers and their wives. The main feature was Lago Das Fumas,  this was a large lake in the crater of a volcano. Later in the day we visited Caldeiras Das Furnas a small community where there were hot springs and clouds of sulphurous gas rising from the ground. At lunch time we were all seated in the open air by the sea and the food we were told was typical Azores fare which included small fried fish, a vegetable bean dish, chicken and potatoes, washed down with wine or beer, then coffee and a nice cake to finish.

Monday 17th and the championship got under way. The fishing was all trolling, 4 or 5 rods were set up with the lures attached set at different distances behind the boat. The boat speed was set in the order of 7 knots with the lures skipping along the surface, very dramatic when a marlin attacks as they attack with force from below so come largely out of the water. Then once hooked the battle begins with the average time to get to the boat about 1 hour as most were in the order of 350 to 400 kg, though  a couple that were sighted the skippers estimated to be over 500 kg, hence why they take a while to land. On the first day there were 5 blue marlin recorded for 5 different teams. I just talk of fish caught as it was only blue marlin caught, these were worth 300 points, other fish had different point but none were caught during Championship.

Tuesday, and the weather was getting better all the time. Worth mentioning is that lunch was provided on all boats by the skipper, some were sandwiches, some bread roll with chicken or cheese to go with it, or the boat I was on today it was bread and a good cheese to start followed by a hot rice dish with duck and chorizo all washed down with a glass of wine. Very enjoyable while you wait patiently for some fishing action. On a personal note this was my first go at game fishing and today when it was my turn to the next strike I was fortunate enough to hook and fight a blue marlin. It was a 45 minute battle with a lot of winding of the reel only for the fish to take another run. The reels are loaded with a 1000 meters of mono about 100 pound breaking strain and when my fish was first hooked, after 3 or 4 minutes it almost emptied the reel of line and I could smell the drag washers of the reel such was the heat built up in them. It was certainly a sight to see this mighty blue marlin of an estimated 3.5 meters long and 350 to 400 kg in weight. It was all estimates as all fish were released at the side of the boat. At one time all on the boat, including me, thought I had lost the fish as suddenly the line went slack, but it was the speed with which the marlin had swam up and across the water. I had been fighting the fish off the stern but when I reeled in the slack line it went tight with the fish still there out to the side of the boat, There were 3 marlin caught on 3 different boats which put 6 teams on 1 fish and the Swiss team out in front with 2 fish.

Day 3 and the final day and it could still be any team to win. There was only 1 marlin brought to the boat today which put Gibraltar B on 2 fish with Switzerland. After the last days fishing the presentation and gala dinner was held at the Clube Naval. All anglers were presented with a mug specially made for the event, a memento of the championship.  So with Gibraltar B and Switzerland on 2 fish each the first count back was applied which was who caught the first fish in the championship. This gave Gibraltar B first place and the gold pin, with Switzerland in silver pin position. There were now 6 teams on one fish but with the same count back applied the England team of Andy Atkins, Richard Russell, Pete Bailey and Jack Challis took 3rd place and bronze pin, which, representing EFSA HQ, I was proud to present to them. The gala dinner followed which was a buffet, with plenty to eat and plenty of wine or beer to drink. One of the nicest items to eat was a local fish called a forkbeard which was very tasty and I just had to go for a second helping. At the end of the evening it was time to say au revoir, till we meet again at the next EFSA event. 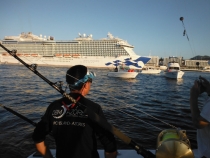