Hof Van Domburg in the Netherlands was the HQ for the 2017 European Shore Championships. Nine EFSA England anglers travelled over on the Monday to enable a practice on Tuesday before the opening ceremony and registration.  Picking up our bait and a few goodies from the well stocked local tackle shop we were soon on the beach for a few hours fishing, catching mainly dabs and whiting then back to the spacious chalets we had been allocated.  EFSA Holland had thoughtfully provided each chalet with a bag of staples and some beer so shopping could wait.

Fishing throughout the three days was tough with strong cold winds, rain, hale, sleet and snaggy pegs that swallowed tackle and beaches that favoured long casters.

Match cards and bait were handed out and pegs drawn before heading to the beach. Whiting made up most of the catches with a few dabs being caught by most.  The match was fished into darkness and the continual heavy rain showers played havoc with keeping match cards dry. Tackle hungry pegs did there best to restrict catches for some of us. Paull Curtice won his zone with Stewart Jones 3rd and Dave Lovelock 4th in their zones.

Unlike the previous day after the peg draw and bait allocation the card were handed to the organisers, as it had been decided all fish would be kept and brought back to be measured and recorded on the match cards in the dry.  This was due to so many cards being almost unreadable the previous day.  The fish would be collected and taken to a sea bird sanctuary for the birds; additionally the match would only be for 4 hours.

Fishing was from the same venues as the previous day in similar conditions. Again, whiting caught at a distance were the mainstay of most catches and again there were some tackle hungry pegs. Paull Curtice continued as he had started with another zone win. However, the rest of us were unable to get into the top positions.

It was back to the usual recording of fish on the match cards as they were caught.  The beach at Domburg was due to be the venue on this day. However, a sperm whale was washed up on the beach overnight, so part of the beach was closed, and the numbers of sightseers meant the car parks were full.  The organisers hastily moved the match to the beach at Oostkapelle, a venue they do not normally fish, so catches were expected to be poor. At the start of the match some of us were unable to reach the sand bank in front of us to begin fishing for up to 15 minutes due to a deep gulley with water still rushing through it. We started in the sunshine but as the evening wore on the occasional rain and sleet showers made their presence felt.  Distance casters were again rewarded with whiting.  Dave Lovelock had a 4th place in his zone as did Richard Russell. Unfortunately, Paull was unable to maintain his winning ways and came 5th in his zone putting him back into 9th place overall.

Dave Lovelock was top senior with a total of 34 points from the three matches.

On the Saturday there was time during the day to clean the tackle and pack away ready for the return journey on the Sunday for most anglers. Saturday evening the presentation and Gala dinner were held. There was a great buffet to feed us, background music provided by a local DJ who did test the fire alarm when he used his smoke machine! After the meal the presentation took place, Paull Curtice being England’s top angler, though others from England did feature in the drawn teams.

The host venue looked after us well and despite the late hours we got back from fishing in the evening the site restaurant stayed open, so we could wind down with a beer and warm meal and discuss where we went wrong. It was a well organised Championship at a great venue, despite the challenging weather. 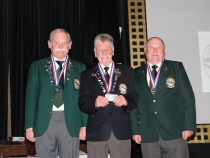