Twenty members travelled to Iceland to fish what was a trial event for next year’s European Boat Championships.  In addition to the Icelandic anglers there were anglers from Belgium, Ireland and Scotland.

The practice day was fished in good weather with most of the target species being caught.   Colin Searles, following on from his success with halibut in Norway, started with a small one as his first fish on the drift for dabs and plaice.  Most of the target fish were caught although there were very few haddock and by the end of the day most anglers thought they knew what rigs they wanted for the competition.

Day One
This should have been the first of the species days but the weather had other ideas and it was cancelled.  Some of us decided a few hours fishing from the harbour wall for dabs would be fun and so it proved to be.  Over two or three hours at least 80 dabs were caught.  Most were a pound or more with the largest a fish of 2lb 2oz caught by Colin.

Day Two
At 6:30 we assembled at the harbour and found our boats.  Catches were variable with some boats managing a good no of species with others not finding sizeable fish in certain categories.  England had had a dozen boat wins with Colin Searles being top man on the day with 134 points. 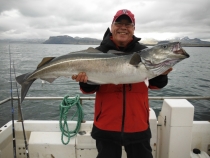